Let me begin by saying, I was immensely blessed to have the company of my two dear friends G and A as I went through this procedure.  I cannot say enough what a blessing they were to me.  I realized in the middle of the procedure that I needed their presence in the room...that if they hadn't been with me, I would have been a puddle of tears instead of the loopy, valium-induced-calm self that I was able to be.  They assisted me with anything I needed before, during, and after the procedure, and waited on me hand and foot when we got back to my house. Truly I am blessed by their love and friendship.  So, G, and A, THANK YOU!!!
~~~
Words cannot describe how amazing the experience was for us during our Frozen Embryo Transfer, but I'll do my best to find the right ones.

Monday morning, I awoke with a prayer on my heart: "Lord God, please place your hand on this embryo as it thaws and keep it safe and healthy through the thaw."
All I've been able to think about for weeks is whether or not the embryo would survive the thaw.  I had not even begun to allow myself to think about, or even pray about, whether or not the embryo would implant.  I couldn't, until I knew the embryo survived.
When the embryologist came in and showed me the picture of our embryo and described it's condition to me, I could sense that he loved his job.  I got the impression that it would make his day for me to ask him as many questions as I could think of about what he gets to do as an embryologist.  I smiled, wishing I had the time to think of questions for him.
When he told me that there was no evidence of any cell damage to our embryo, and that he couldn't even tell that our embryo had been frozen, an image came to my mind of the hand of God covering our embryo and overseeing the thawing process Himself.  I was overwhelmed by how completely God had responded to the prayer of my heart.  He not only safely thawed the embryo, but he went above and beyond and prevented any damage, and made it so that an experienced embryologist was unable to tell it had ever even been frozen.
But the blessings didn't end there!
It turns out that, although the clinic was in the process of attaining wireless Internet that week, it was not up and running.  I had brought along my computer on the off chance that they may have it so that I could attempt to bring my DH into the room via Skype.  I decided, since I had my computer with me, to see if there were any unprotected wireless services in the area.  Sure enough, there was a dentist office nearby that graciously, though unknowingly, allowed me to access their wireless Internet while I was in the pre-op room. (*Note-a FET is not an operation, but it's performed in the same room as an IVF which is an operation, so the room they prep you in for both procedures is the same and called the "pre-op" room)
I was able to reach my DH via Skype prior to the procedure, but wasn't sure I would be able to access the Internet I was borrowing all the way back in the procedure room.  So, I uploaded (downloaded?) Skype to my iPhone and ran a few test calls to DH.  No luck.  It would not work on my phone.  I tried several times to make a good connection with him on my iPhone and it didn't work.  I decided I should be thankful he was able to be with me before, and that I would be able to contact him immediately after, but that we would still try bringing my computer into the room anyway.
On the way to the procedure room, we lost the Internet connection.  But after a few minutes, I heard the Skype ring on my phone!  I answered it, but there was no response.  My image was showing up, and the phone said we were connected, so I just assumed DH could see everything even if he probably couldn't hear it.  About three minutes later I heard my sweet husband's voice say, "Hello?"
I was beyond excited!  I was thrilled!  He could hear us, AND he could see what was going on.  There was no delay, no scrambled words, no garbled images, no freezing of the screen.  He was right there with us every step of the way, having conversations with the doctor and seeing everything as it was happening!  To me, this is also nothing less than the hand of God intervening and responding to another cry of my heart.  We never have such a perfect connection on Skype, and for it to have even worked on my phone was astounding.
Then another amazing thing happened! 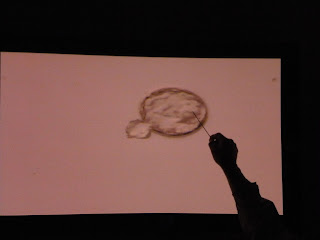 When the embryologist put the image of our embryo up on the screen, it was in the process of hatching!  The energy of the room changed immediately when we saw this on the screen and I could tell it must be a very exciting thing!  (Keep in mind, I was on Valium for this and I was a bit stoned...my reasoning skills were greatly limited.)  I learned later that it is critical for an embryo to hatch in order to be able to implant, so this was a very good sign.  Also, as I reflected on it after the Valium wore off, I realized this meant that the embryo was still living and growing and healthy!
(I realized as I played the video back later that the doctor actually pointed out this fact to me, but apparently I was too stoned to process it.
His words were: "So it's looking really, really good. It's not only re-expanded, but it's already hatching.  It's beautiful, isn't it.")
And to a woman who longs for assurance that this just might work, to a woman who has been living with infertility for seven and a half years, even under the influence of Valium, it was a beautiful sight to behold, indeed. 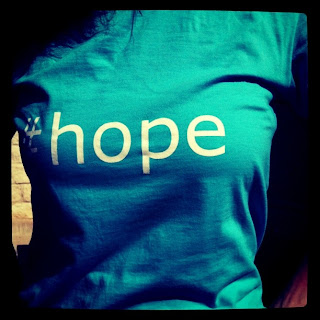