Three Myths and a Pushy Lady

Of the many activities that fill my days, one involves getting together weekly with a large group of women from various different backgrounds and denominations, studying the bible together after we break into smaller groups.  I very much enjoy this time and often choose to be vulnerable with my smaller group to promote community and encourage others to share their hearts.

Every time I choose to be vulnerable, no matter the setting, I am aware that there is risk involved.  I assent to the fact that I am essentially opening myself up to receive criticism, unrequested advice, judgement, etcetera.  But I often feel the benefit outweighs the risks, especially if there's a chance others can be encouraged by what I share.
I had mentioned our infertility several times while sharing in my group, but it was never the crux of what I was sharing, so no one had yet offered any "helpful" advice to "fix" my problem of infertility.
During National Infertility Awareness Week, one of the questions of the lesson was along the lines of, "How has God shown His faithfulness to you this week?"
I shared briefly how the details had fallen into place for my husband and I to be able to attempt an IVF treatment before he had to deploy and that the expense was cut in half.  I was pretty excited about what I perceive as God's faithfulness and provision for us in that regard, so I did not hesitate to share (and I'd gladly do it again).
We continued discussing the questions from the week and then dismissed to go to the main lecture with all the other smaller groups.
Now, in the course of these last seven years, my husband and I have heard a lot of well-intended advice and counsel regarding our infertility.  MUCH of it has been from well-meaning, church-going friends or acquaintances.  And women, stereotypically, tend to feel compelled more often than not to share their two cents on any given subject, specifically emotionally heavy ones.
So I don't know why I expected to get out of that room without hearing from anyone on their perspective of why God has me where I am and how I can get out of it.  Perhaps it's because by this point in the study we are all supposed to be well-rehearsed in discerning appropriate times and appropriate ways to respond when someone has been vulnerable.  (By the way, when God has me in a specific place for a specific reason, I want to be where he has me, not try to get out of it.  I don't know why people insist on trying to "rescue" me from the hand of God! ~Just sayin')
It's fitting (in my opinion) and rather comical that during the week of busting myths about infertility I would encounter in ONE conversation THREE myths that are commonly thrust upon infertile couples.  I wish I could say that I was quick on my feet and busted those myths then and there, but I didn't.  I was shocked that all three myths were spoken in almost the same breath; I only had two minutes to respond before needing to be at the lecture; and I didn't feel it was the appropriate setting to essentially be rude in my response (which is what I would have been without enough time to calm down).
As we were returning our chairs to where they belong, a lovely young pastor's wife (who had approached me with inappropriate "let-me-speak-into-your-life-without-you-asking-me-to" comments before) came purposely toward me and gushed forth a story of how she and her husband had been infertile and had been told they would never be able to have children.  She shared how her physician instructed her to throw away all her charts and books and quit trying for one month and pray about whether they wanted to pursue the treatments they tried to schedule (which sounded very unlike any physician I've ever encountered). 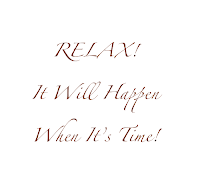 I'm sure you can guess where this is going.  Yep!  Myth #1, and the point of the first part of her story, was "relax, stop trying, and you'll get pregnant."  Not a direct quote from her, but it was implied in her story.
Sure enough, "miraculously" the week before their scheduled fertility treatment, they found out they were pregnant with the first of their three children. (Um, did I mention she's much younger than me?)
When I tried to interject, she held up her hand, closed her eyes, smiled a huge smile while shaking her head a bit, and almost without breathing continued with her extremely important words of...comfort? encouragement? healing?
She proceeded to tell me about how, if relaxing and waiting doesn't work that "adoption is always an" (altogether now) "option," and that she and her husband had looked into foster care which is also available and that if I needed any information they had done a lot of research that she'd be happy to share with me if I was interested (she still hadn't really taken a breath, it seemed, at this point).
That's right, folks!  Myth #2 of her monologue was "adoption is always an option," implying that it will somehow cure me of my infertility, or at the very least solve the apparent problem of my not having children.  (I always marvel that people bring up adoption to infertile couples as if it's the newest thing ever invented and they'll be the first to share the news that it's an actual thing that exists.)

At this point, I was irritated because 1) I do not have a deep relationship with this woman and yet it is the second time she has felt compelled beyond control to share her own "wisdom" and "insight" into a situation of which she had very limited information, and 2) I had not invited her to share her "solutions" with me.
So, when she mentioned the research that she and her husband had done regarding foster care and adoption, I interrupted her, curtly, and let her know that my husband and I had done quite a bit of research in the seven years of our nine years of marriage that we've known we were infertile.
Which brings us to Myth #3 of this woman's story.  When she found out we've been dealing with infertility for seven years, she was visibly taken aback and said, "Oh!  Well, I guess God knows that some people can handle much more than others!  Seven years is a long time!  We only had to wait one year!"
Yes, the 3rd myth brought up in the five minute conversation with this woman is that infertility is being unable to get pregnant in the time frame you want.  She was never truly infertile!  She hadn't, for her age bracket, even made it to the point of time it takes for a doctor to diagnose someone as infertile!  I don't know all the details of her story, just as she didn't know mine, but I sure would like to know why any doctor would have told her prior to a year of trying that she would never be able to have children.  My suspicion is that she heard things that were not spoken, or else that she threw that information into her story in order to add more drama or credibility.
I can laugh about this now, and fully intended to post it during the NIAW Bust a Myth campaign.  But for a moment, living through this scenario shortly before Mother's Day with an IVF and my husband's deployment looming before me, was more painful than I would have expected.
A friend of mine recently shared with me that of the many infertile women she's known, none of them were able to talk openly about their struggle until it was finally resolved.  She told me that to encourage me, because she's often surprised at how freely I speak about our struggle.  It was very encouraging.  It's worth it to me, no matter how painful situations like the one I described above are; it's worth it to me to endure temporary pain in hope of the possibility of offering comfort to others who have truly experienced this journey.


There is also the hope that others, like the woman described above, who genuinely have no clue, will somehow have their eyes opened to reality and learn what it is to truly weep with those who weep, mourn with those who mourn, and rejoice with those who rejoice.
May your opportunities to share your experiences bring you comfort, encouragement, and peace, and may you have strength in the moments you need it most!
Blessings,
Julia
Posted by Julia Lynn at 5:04 PM