No, we haven't started In-Vitro or done a transfer.  No, we haven't attempted in any way to get pregnant at all this month.  My husband has actually been out of state most of the month and rather inaccessible.

This two week wait is one I've never had to endure before, and one I hope I never have to endure again.
If you have been following my blog, you know that there have been recent moments of chaos in my life.  There's been much more going on than what I've shared here, so if you can envision a life of chaos from what you've read so far, amplify that in your mind several times over and you get a glimpse of how chaotic my life has felt.  Whether or not it's really been in chaos is up for debate, but the feeling of chaos has been present for a while.
Before I had to deal with the FN (fertility nazi), there was a lot on my plate that I had to deal with while my husband was away for training.  Enter the FN and the stress she interjected into my life and the "lot" on my plate seemed to double.  And after my encounter with the FN, even more was put on my plate.  Let me tell you, this girl is full.  I didn't want the serving I began with, and I certainly don't want the additional portions.  But they're there, so I'm dealing with them.

There are times in a military spouse's life where silence is dictated by the military.  At times it's a must to remain silent about future dates and events.  At times it's a must to be kept waiting in silence for the safety of the general population.  Then there are times when the silence, at least the quantity of it, makes absolutely no sense and isn't really about safety at all.
In the midst of his absence, my husband informed me that he would be out of communication for a period of two weeks.  No text messages.  No e-mail.  No Facebook.  No phone.  Nothing.  For two weeks.  Not ten days.  Fourteen.  Possibly more.
Some of you may be thinking that'd be heaven.  Some of you may need a break from communication with your spouse.  But at this point in my life, I really need his input.  I don't just desire it.  I need it.
At first I thought I'd send him e-mail messages that he could read when he regained communication privileges.  So, I sent out recaps of my days into cyberspace to sit in his inbox for two weeks.  I soon realized that those messages were only fulfilling part of a need.
I am a very verbose person (clearly)!  Tiny details are important to me, so it's nearly impossible for me to leave them out.  I'm the same way on the listening end.  I want to hear the details.  I want to know the thoughts and feelings behind the story.  I want to understand the depths of what the person experienced or thought.  And I often long for a response, feedback, to what I've said.  (Feel free to leave comments on my blog, by the way.)
I thought, initially, that I'd be fine with the two weeks.  I wasn't happy about it at all, and I cried when we said "goodbye" in our last phone call, but I figured I could tough it out like a good military spouse.
I was wrong.  I did not anticipate how incredibly painful it would be to be completely cut off from the man who has shared my heart and life with me for the past nearly nine years.
In dealing with infertility, there are few (in the immediate, tangible sense) who truly understand.  I have friends in different cities a few hours away that I can call, but in my immediate surroundings, I have no one (aside from my husband).
Add to that the fact that we were keeping our pursuit of IVF a secret from family and fertile friends because we're not even sure we will get to fully follow that path.  For the first time in my life, I understood how it feels to deal with infertility completely alone.  I've never had to endure a procedure without the support of friends and family.  We've always kept them informed every step of the way.  And I've always had my husband at my side, or at least accessible via telephone, to keep him informed of how things went.
But this time, I was facing the FN and her ridiculous repeat tests alone.  The silence was more than I could bear.
I had silence from the one person in this world who knows me most intimately, so I could not draw from his strength or wisdom; and I felt I had to remain silent about what I was going through (fertility-wise) to spare my family and friends the pain of disappointment if things didn't work out.
I felt isolated, like one tiny speck on a perfectly white canvas.  There was all this world around me, but I had nowhere to turn.
I wish I could say that the communication blackout has been lifted, but I still have at least another day and a half of it to push through.  I can say that I was compelled to share with a select few in my immediate surroundings our plans to pursue IVF.  Not only because I needed someone to drive me to and from the hospital for the test, but also because I needed an outlet.  Did it make all the other stuff I have to deal with disappear?  Of course not, but it made that one big piece a little easier to bear.
One thing that I have learned in this silence made it easier to endure.  As I sent out e-mail and text messages to my husband, I knew they were not received and that I would not get a response.  I was void of anticipation, and felt very stifled.  But that realization was juxtaposed against the reality of my communication with God.  (Bear with me.)  When I think or speak something to my God, it doesn't fall on deaf ears or bounce off the atmosphere into nothingness.  The way I know this is I receive responses.  No, I've never heard the audible voice of God, nor do I expect to this side of Heaven, but there is movement in my heart, prompting in my spirit, and thoughts at the perfect moment that do not come from me.  I can think, speak, type, call, and write to my husband all the live-long day, and no matter how desperately I desire a response from him, there will not be one in this blackout.  But even as I long to hear from my husband, I can hear from my God through his word, his Spirit, and even his people.
It was just very exciting to me to be reminded of how truly miraculous communication with my God actually is.  So, in the midst of the silence from my spouse, my God whispered to my heart that He's very much here with me. 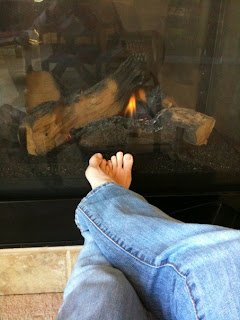 I would like to be able to say that I've endured this two week wait with grace, dignity and poise, but much of it has been spent fretting over and being angry about my circumstances.  Thankfully, there have been small victories, but two weeks (as you all well know) is a very long time.
May your two week waits be few in number and filled with hope and peace!  You are some of the strongest women I know!
Blessings,
Julia
Posted by Julia Lynn at 7:06 PM