I asked God for the same favor this month that I have asked for the last several months: If I'm not pregnant, can I please not have my period?


Seems like a silly request, especially when you'd think I'd ask something like, "Can I please be pregnant this month?"  But why wait for the monthly slap in the face to reveal what you already know to be true, when you can request the gentle awareness of that fact instead?


The reality is that after seven years of never once having a positive result on a pregnancy test, the "can I please be pregnant this month" request fades into the background.  There's an unspoken understanding between God and me that the pregnancy request is always on the table.  And, after seven years, it can be a bit too painful to consciously ask, when I know he will grant that request when he's good and ready.  (Brings to mind images from childhood of asking and asking for something from my parents, who fully intended to give me that thing but were making me wait for it, with good reason.)


As for my period this month, it seems that my request in that area has been granted, which is a double edged sword.  On the one hand, I have the confirmation of a negative pregnancy test from my recent visit with the doctor, and on the other hand, I am questioning what reproductive repercussions will result from this granted request.  I may not have a single thing to worry about, however, as I have plenty of 45-48 day cycles under my belt, and I'm only on day 41 right now.  Regardless, I have a small break from the nuisance of a certain monthly visitor I have grown to regard with disdain. 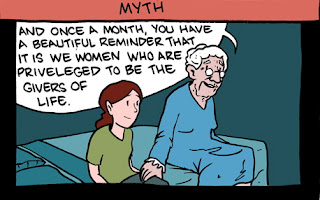 As shocking as it may seem to some of you that I, (1) made the request I made, (2) believe my request was granted, and (3) am not freaked out by a 45 day cycle, what was shocking to me was my unexpected emotional response to the events of this week.  Call it a "freak-out" moment, a break down, or a good-old-fashioned cry, it surprised me and felt like it came out of nowhere.  (It's been a while since that's happened to me.)

That brings us to the initial buildup before the shockwave of my emotions erupted in full force.  I responded to the stressful news about our renters with intensity, drama, and anger far too extreme for the circumstances.  Even I realized I was overreacting, but I felt compelled to respond that way and incapable of changing my attitude.  I informed my husband that this was the worst day ever and that I didn't want to go to our bible study and I didn't want to see people and I didn't want to talk to people and on and on and on.  (I had called him before he came home, and had indicated over the phone that I wasn't really up for being social, although I had no idea why.)


When I'm overreacting, it's pretty much a given that I will be super clumsy and end up with some kind of injury.  True to form, I stumbled around the tiny space we live in, tripping over cats, bumping into doors, and managing to get scratched by one of the cats while he was playing.  I got ready for bible study and demanded asked God to please change my attitude as I had a crappy one and I was incapable of changing it myself. 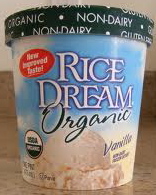 Did I mention I had grabbed a half pint of ice cream from the freezer to eat on the way?  Yeah, I was in that crappy of a mood.


We arrived at the house where our bible study group was meeting and I'm sure I was muttering any number of unpleasant statements about why it was a bad idea for me to be there, and how terrible Rice Dream Ice Cream tastes and why on earth would anyone want to make ice cream that tastes like a popsicle stick blah, blah, blah.


And just as we were about to open the doors to get out of the car, I was overcome with emotion and had a ridiculous (yet horrifying to me at the time) thought that I had to share with my husband.

I asked him, "Do you want to know what the worst part about this whole stupid day was?"  Cue the tears that render one speechless.  He waited.  I finally eked out that the worst part of the day was that I almost bought and ate a bunch of "crap food that I'm not allowed to have!"  Then I began sobbing. (Was I an emotional wreck or what?  Wonder if the 45 day cycle has anything to do with that.)

Somehow, I went from that "revelation" to the realization that I had also allowed myself to believe that I would make a good mother.  At this point, I honestly didn't know what was truly bothering me.  I was beginning that emotional walk-through women sometimes often have to take to get to the heart of what is really bothering them.


I went on to explain that the day before, when we had helped my friend with her kids, and then again that day while I was keeping her kids, I was encouraged by our responses to her children and I allowed myself the luxury of believing that I would make a great mom.


Please don't misunderstand!  I have never truly believed that I would make a terrible mother.  But, as a coping mechanism on this journey, I have allowed my many shortcomings as a homemaker and keeper of two cats to become greater in my mind than they actually are, so that I could put a "reason" on why God was not allowing us to have kids.  I know it's not reality, and that that's not how God works, and that there are a lot of things about me that exude motherhood.  But it helped me keep hope at bay so I could hunker down for the long haul.  And those two days with my friend's kids, combined with our newly forward progression, breathed life into that hope again, and it was painful.


Through many tears and several minutes during that time in the car before bible study, I unravelled the chaotic, tangled threads in my mind and found the starting point.  Gradually, I realized that I was really simply grieving another failed fertility treatment.


For an entire year I had strictly adhered to a diet, a lifestyle really, that I genuinely hoped would put an end to our infertility.  And that day, as I was shopping for toiletries, I passed by junk food (the sight of which usually makes me sick) and I not only craved it, but I almost justified buying it and eating it.  More than once in that store, I was tempted to buy many things I'm allergic to, as well as things I avoid out of common sense.


So, even though the past year has not involved countless doctor visits, strict timing of certain activities, pills, shots, and sonograms, once we decided to move forward out of this place of waiting, the efforts of the entire year became a failed fertility treatment.  Which means we are essentially back to square one.


Thankfully, I have the most patient and understanding husband in all the world.  He loves me through my times of chaos and mood swings.  He waits for me to form thoughts and words around my tears.  And he didn't mind that I made us late for bible study while I sobbed about junk food in the car.  Because he allowed me to go through that process un-rushed and unhindered, I was able to grieve the thing I needed to grieve and move on.


The layers of this journey seem endless, but I am so thankful for the partner God blessed me with to walk with me through it.


"Now faith is the assurance of things hoped for, the conviction of things not seen." (Hebrews 11:1, ESV)
Definition of "hope: to desire with expectation of obtainment" (Merriam Webster Dictionary, m-w.com)