(This post is dealing with what was right for me.  This is not an advice column.  I am not a physician or medically trained.  Please consult your physician about any major diet changes.)

I love to bake.  I love scooping, and measuring, mixing, and stirring.  I love rolling out dough, shaping it, cutting it, smelling it, and baking it.  I love the smell of yeast bread rising and baking.  I love the feel of pie dough, cookie dough, and bread dough between my hands.  The very act of kneading bread or cutting shortening into flour with my hands for pie dough is equivalent to an hour long therapy session.  I love it!  Aprons, rolling pins, measuring spoons, whisks, mixers....these are the things I get excited about seeing in catalogs and store windows.  Give me a gift card to a William's Sonoma or Crate and Barrel and I'll probably swoon (or squeal with glee and nearly strangle the giver with a huge bear hug). 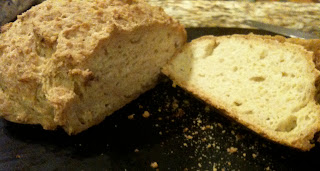 But my very favorite thing to bake has always been bread.  To give you an idea of how much I love baking bread, let me share that I once received a very expensive bread machine as a gift, and I was a little sad.  I didn't want to hurt the person who gave it to me, so I kept it for a while, and I used it twice.  I eventually gave it away to a friend who needed to make her own bread and had neither the time nor desire to do so. The person who gave me the machine was unaware that the reason I loved home-made bread so much was for the simple act of making it.  It is just short of heaven for me to be in the kitchen making bread.
When the whole idea of "going" gluten-free  first came to my attention, I was not kind.  I did not have any real details.  To me it sounded like another fad diet that was coming from somewhere out West for celebrities to sound important.  I did not know that there is a real illness that is actually quite serious attached to gluten, as well as various levels of sensitivity that can affect health to a lesser degree.  I certainly never dreamed that living without gluten would ever impact my world directly.
My husband and I had been rolling along the path of infertility for several years, and some health issues I'd had for what seemed like forever were getting worse and making life rather difficult.  I had been to doctors many, many times throughout my life because of my various symptoms, and I was always tested for the same things: diabetes, thyroid issues, and anemia.  Always, without fail, my test result came back "within normal limits".


As I got older, more symptoms started to surface and I was tested for Autoimmune Disorders with the suspicion of Rheumatoid Arthritis.  Again, everything came back normal.  No doctors could account for why I was having the issues I was having, and I was growing frustrated.  I knew I wasn't crazy, that the symptoms were real, but there was nothing that anyone could do allopathically.  The idea of seeing someone who could treat me with acupuncture came to mind, and I put it on a back burner.
We went through our various fertility treatments over the years, and came to a place of waiting for the next step.  I was more miserable physically than I'd ever been, I was emotionally spent, and the hormones had wreaked havoc on my body.  I asked my husband if we could use some of the money we'd saved for fertility treatments to focus on getting my body better.  He agreed, and was fully supportive of me going to a naturopath, because he knew nothing could be done for me in the allopathic world beyond pain management.
We went to see a physician who had been highly recommended by a close friend of ours.  He tested me for various different sensitivities to food, and one of the many that I had was sensitivity to gluten.  Gluten, sugar, milk, and eggs were my major ones.  I was disappointed, to say the least.
So, I went home, Googled "gluten" and was greatly encouraged by the blogs I found.  I wasn't looking for blogs, but I found them to be the most helpful sites with the most useful information.  My fears of never being able to bake bread again (or even bake pastries) were laid to rest.  There are indeed many pioneers who love to bake as much as I do that forged ahead and paved the way for others to have ample recipes, resources, encouragement, and support to join the ranks of gluten-free bakers.  (If you're looking for some, go here.)
As for my health, the plan was to do an elimination diet.  But for me it was a lifestyle change.  Although I loved baking, I did not enjoy cooking in the least.  If it wasn't fast, easy to prepare, easy to clean up, and yummy, then it wasn't an option for food at our house.  I will say, a lot of that stemmed from the fact that I was tired all the time, had very little energy, and was usually in pain.  (And, yes, the question, "Can I really handle being a mom if I feel this way all the time," had entered my mind many times....that was part of my case for getting my body better.)
I was armed with determination to feel better, a game plan, a list of things I absolutely could not eat, and some menus for each progressive week with recipes.  I was ready to embrace this thing in full force.  The first week was a fast (which involved drinking a specially formulated shake five to six times a day and eating no food but drinking lots of water).  After the third day, I felt better.  By the end of the week, I was eager to cook. 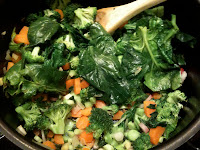 And can I just say: I had no idea how much fun cooking could be!  I had no idea how many vegetables existed that I had either never heard of or never tried!  I had no idea that a recipe with only four ingredients could be spectacular (even my husband liked it...it wasn't just b/c I was "starving")!  I had no idea how therapeutic chopping vegetables, onions, and mincing garlic could be!  It was as therapeutic as kneading bread :-)  I was happy.  My husband was encouraged because he noticed a difference in my countenance, in how I felt, in my energy level, everything.  He said the biggest thing was that I didn't mention the pain in my joints anymore.  That's because there was no pain!  It was great!  :-)
(Now, it's important for me to note here that the pain in my joints is definitely explained by certain foods.  As I was allowed to reintroduce foods to my diet, I did encounter joint pain.  In fact, I am typing right now with joint pain throughout my body because I tried to add coconut back to my diet a few days ago (I really miss coconut).  So, since I strictly avoid gluten and am not ever attempting to add that back to my diet, I cannot say whether or not I get joint pain from eating gluten.  I can definitively tie it to milk, potatoes, and coconut.  And I suspect processed sugar may also be a culprit, but I avoid processed sugar rather strictly as well.  However, joint pain wasn't my only concern, and it's not the only symptom that is gone.)
Somewhere along the way, I realized that getting pregnant was not, and could not be, the end all-be all for me.  I could not allow my desire to get pregnant and to be a mom to consume my life.  I praise God that the pain and my other symptoms became intense enough that my health took precedence over trying to get pregnant.  I cannot imagine having an infant or a toddler while trying to cope the way I was having to cope.  But now we're at a crossroads.  There's an opportunity to get put on a waiting list for In-Vitro (our next fertility treatment option), but my PCOD symptoms have improved dramatically in the last three months.  I do not want to undo all the positive progress by putting myself through a rigorous round of hormone therapy, not to mention the stress involved with that procedure.  Add to that an upcoming deployment in our military future and we've got quite a lot to think about.
We are approaching this decision the same way we have each of our other fertility treatments, with much prayer and discussion.  Deep down, I'm hoping the dietary changes I have made will prove to reveal the cause of our infertility.  But I've been on this road long enough to know that there are not always explanations or answers.  So, part of me wants to move forward, so we don't miss our window of opportunity.  Part of me wants to wait and see if the next three months will be any different.  And beyond all that, there is the part of me that whispers continuously, "God knows what He's doing.  He is the one who opens and closes wombs. Nothing you do, or do not do, can make you pregnant if it's not His timing."

Some days, those thoughts do not bring me comfort.  Some days I like to believe that I know better than God does what's best for me.  My four short years in college are enough to remind me that that is truly not the case.  So for us, it's currently about trusting and waiting.  Sometimes it's about us trusting and moving forward, but at the moment it seems we are being asked to wait.
Posted by Julia Lynn at 1:40 PM